You are welcome to go through our tutorials but please keep in mind that as we rely on community PRs for maintainance they may be out of date.

In our previous lesson we learnt all about JavaScript variables, functions and objects. In this tutorial we will be diving a little deeper, exploring expressions, loops, arrays and the DOM.

Download the files required to begin working through the tutorial from here.

In the first half of this tutorial we will be using the files lesson2.html and script.js, then files london.html and london-script.js for the second part.

In the first tutorial, we learnt all about values.

We are now going to introduce one more important type: booleans. A boolean can only be true or false, for example:

In the first tutorial, we learnt about expressions using the + operator. The other basic math operators are -, *, and /:

Why not try some other maths problem using the x and y variables?

The modulus % operator returns the remainder when dividing one operand by another.

The exponentiation ** operator returns the result of raising the first operand to the power of the second.

The increment ++ and decrement -- operators return the result of adding one and subtracting one from an operand respectively.

The === operator compares two values, it returns the boolean true if they are equal and false if they are not.

You may also see == and !=, these are similar but have some quirks so it’s generally recommended to avoid them. It is safer to use === and !== as they will always do what you expect.

The > and < operators are “greater than” and “less than”. You can use them to tell which of two numbers is bigger.

Play around with changing the coaches, students and pizzas variable numbers to familiarise yourself with operators.

You can also combine operators.

Now sit with your coach and create 2 variables, one is your age and one is the minimum driving age. Then console log whether you are old enough to drive.

An if statement lets you run a piece of code if an expression is true.

Change the codebarIsAwesome variable to false, what happens now?

You can use an expression inside an if statement.

You can add an else block to run some code if the expression is false.

Using the people and pizza example we wrote above and using the Ternary Operator instead of if/else it would look like this:

A loop is used to execute a set of statements repeatedly until a condition is met.

For example, if we wanted to set a timer on an online ticket outlet, we could count the timer down and while it hasn’t reached zero, the option to buy the ticket could still be available.

You can read this as:

Since the value of i goes up by one at the end of each loop iteration, eventually (when i is 11) the test will be false, and the while loop stops.

The for loop offers the same behaviour as a while loop, but arranged in a way that is often more convenient. It’s very common in loops to have a counter (as there was in the case above), and the for loop caters especially for this.

The stuff in the round brackets is split into three parts by ;. The first part is used once, before the loop begins. It’s a good place to set an initial value for a counter (like x = 1 in the while loop example).

The second part is a test, and like in the while loop it is checked before each iteration.

The third part is executed after each loop iteration. It’s useful for incrementing the loop counter.

For example, if we had an online shopping basket, we could loop over the items in the basket and add up the cost to a total using a for loop. The initial value can be zero, the second part can test that there are still items left to be added up and the third part can increment to the next item. The code that is run on each iteration can add the cost to a shopping basket total.

The while loop above can be rewritten as a for loop:

Even though while loops are simpler than for loops, it is more common to see for loops. This is because loops are often used to do something with arrays, which are introduced in the next section.

An array is a simple data structure. It can hold a list of elements of the same or different types (e.g. strings, numbers, booleans). In an array each element can be accessed using the index.

Confusingly, the first index of an array in JavaScript is 0, not 1.

To understand this better, let’s create an array of strings.

To retrieve an item from the array, we use square bracket notation

To get the first item animals[0], the second animals[1] etc.

The length property returns the size of the array

The length property is extremely useful when you want to do something with every element in an array. For example, to log each entry of the animals array, you can use animals.length with a for loop:

Note that we go up to, but do not include animals.length as an index. This is because arrays are indexed from zero, so the last index is always one less than the length.

The word method is usually used to mean a function that belongs to an object. It’s common to see them used with the dot notation.

Adding objects to an array

array.push(object) adds an element to the end of the array

array.unshift(object) adds an element to the beginning of the array

What do you expect to get when apply pop() to the animals array? Try it out.

Analogously, array.shift() removes and returns the first element of the array.

To order the elements of an array we can use sort().

Try this out on an array of strings.

What happens when you add the operator reverse() like so animals.sort().reverse();

sort takes the array and sorts the items in a kind of alphabetic order (but be careful of capital letters and special characters). sort can be (and usually is) customised to sort things in any way you like. It can take a function as an argument to tell it what to do. For example:

Can you write a function called sortNumbersDescending that can be used in place of .sort(sortNumbersAscending).reverse()?

Now that we know what arrays are, we can use that to understand loops better. Let’s try out another example:

Can you understand what this loop is doing? Try to explain it to your coach.

There is a counter here though, so a better way to write this would be:

What is the DOM?

When the HTML is loaded on our page, the browser generates its DOM. This enables us to access and interact with HTML elements using JavaScript. 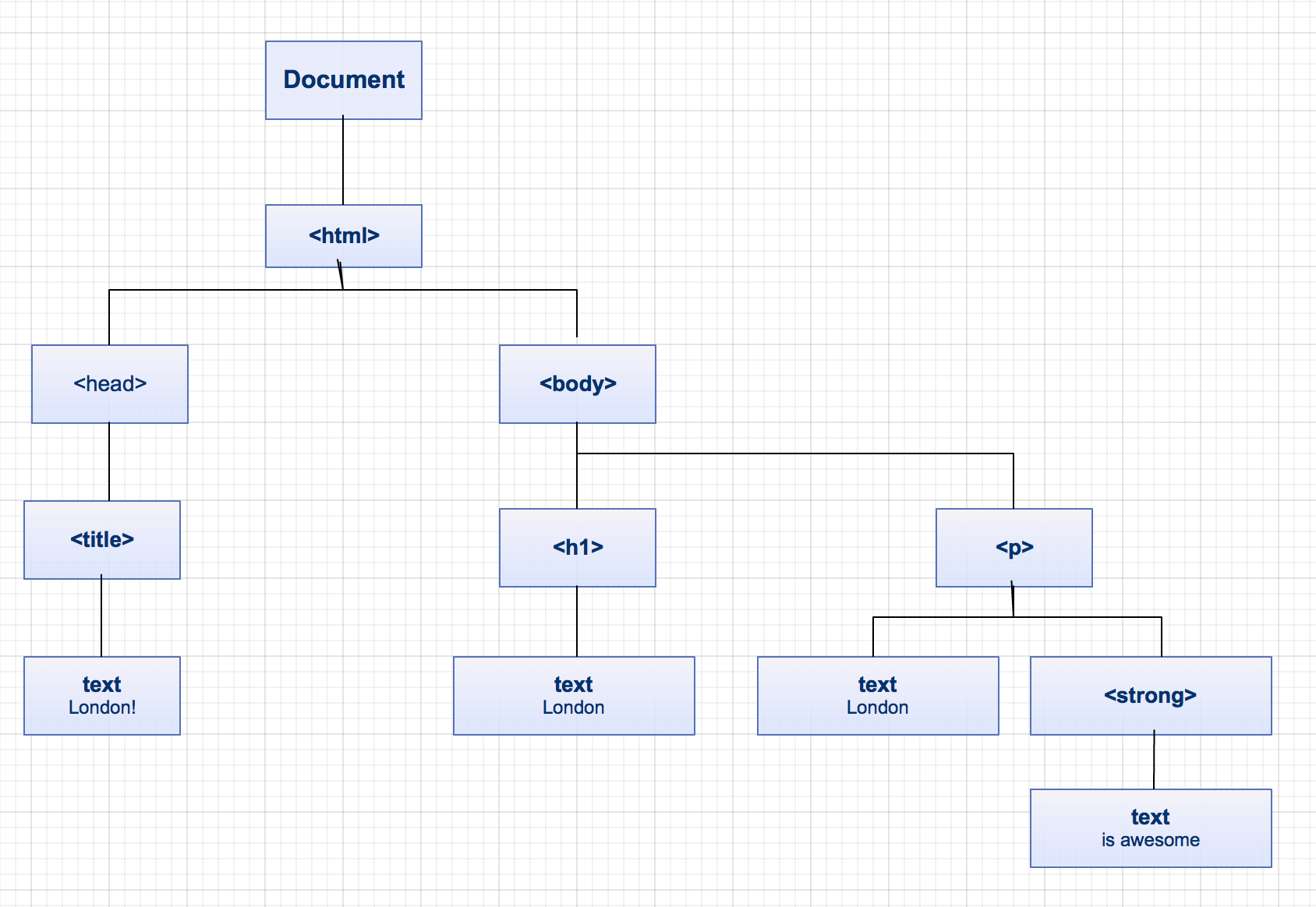 Interacting with the DOM

The DOM is represented by nodes. Each node has different properties, and nodes are connected (like in the tree diagram above).

Let’s try interacting with the DOM of our page by getting the parent node of the body.

Try this using the console on the inspector. As the script gets loaded before the body, the element will not be there if you try adding this to the script.js

To get around this issue, we will be wrapping our called in functions triggered by the interface.

Write a function that lists all DOM children elements.

and add a link that triggers the function

But interacting with DOM doesn’t need to be this complicated.

An easier way of interacting with the DOM is by retrieving elements using their tag.

That’s not very easy though, as it’s likely that you will have multiple paragraphs, divs, links or other elements.

The most common way, is by retrieving elements by id.

There are three main steps we need to follow to achieve this.

Try this out using the london object we declared previously

Don’t forget to add a link that calls the function.

Create functions that load all the individual information we have stored about London. If you are having trouble ask for help from your coach.

When you are done with this, try creating one main function that does the calls. Use the JavaScript onload() event on the body, similar to how we used the onclick() event previously, to add the information to the page.

Modify the JavaScript file we used in the first part of the lesson, and its HTML page so that you can load the information on the page instead of the console.

Remember to wrap your code in functions!

This ends our Beginning JavaScript. Is there something you don’t understand? Try and go through the provided resources with your coach. If you have any feedback, or can think of ways to improve this tutorial send us an email and let us know.

If you want to learn how to Build a Random Phrase Generator in JavaScript, then watch this video on our YouTube.